Since antiquity, the ritual of Misogi 禊 has been performed in Japan, the Ryukyu islands and all parts of Asia. In ancient times it was the Yamabushi 山伏, the ‘mountain hermits,’ that would perform such tasks as extended periods with no sleep, breath training and of course the infamous “standing or sitting under the waterfall in winter time.”  Ceremonies such as these,  represent the heart and soul of ancient East Asia that still finds it’s way into everyday circumstance.  Take for example the salutation of ‘How are you?” – in Japanese one would say ‘O genki desu ka?’ お元気ですか?  Note the word Ki in this common phrase. Ki  is the word for life force, life breath, vital air or energy in the Japanese language.  This is an example that underlies  how integral the world view of life force, energy and the soul are central in Japanese vocabulary. 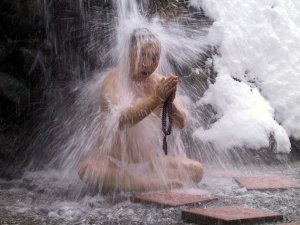 Yes, that’s cold water. Notice the ice and snow next to him. Brrrr!

In the traditional ‘old ways’ of Okinawa Kenpo practice, I personally knew of many Okinawan karate sensei that would participate in such ceremonies.  I was lucky enough to study under the late Seikichi Odo.  He introduced me to several Yuta (Traditional Okinawan Shaman) which performed various ceremonies including variances of Misogi and their applications within Okinawan Karate.

When I was a boy living in Okinawa, I was getting off the bus to go ‘straight home’ to train at the dojo. (My parents were live in students for Seikichi Odo at the time and we lived above the dojo in Agena, Okinawa.)  I recall a schoolmate friend of mine waving at me asking me to join him and his friends for some after school fun.  I answered, “I am sorry Kenji, I cannot. I have to go and train.”  My good friend Kenji Nakazano, an open minded Okinawan classmate of mine responded, “Train for what?”

Yep. All karate dojos dream of this.

Misogi waza 禊技 in Okinawa Kenpo 沖縄拳法 prepares the mind for training and to learn how to develop your Tanden 丹田 (your center.)  Due to the singular uniqueness of Okinawa Kenpo, with its emphasis of atemi-waza 当て身技 (nerve strikes, pressure points),  katame-waza 固技 (grappling and joint lock techniques), nage-waza, 投げ技, (throwing techniques) the importance of purification in your karate training is ever more necessary.

The late Seiyu Oyata, a traditional practitioner of Okinawa Kenpo, emphasized that the karate that we practice is ‘not a form of self-defense- but a form of life-protection.’  While there are minor differences with regards to the legacies the late Seikichi Odo and the late Seiyu Oyata, if one examines the component of the kata taught and performed  by both of these individuals, the timing, the technique and approach are identical.  Their approach to karate and the level of mastery these two karate sensei exemplified provides an example to all karate practitioners today. 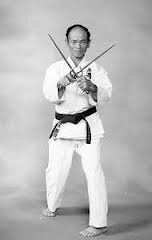 As we enter the new year, we should remember these two karate men in what they have taught us.

2 responses to “Misogi 禊: The Purification of Okinawa Kenpo”